A Close Up on Lives: Basil Peacock and George Harbottle and the outbreak of WWI in Newcastle

In the early days of August 1914, Newcastle upon Tyne was a city in the shadow of war. Each person that was there in those days had a unique story to tell and it is fascinating when some of these are uncovered. Two of these stories have been immortalised by writers who documented their experience living through the times. Both men forged their own paths, yet both experiences similarly reveal the extent of how far the lives of ordinary people in Newcastle were determined by the war.

Basil Peacock was a student at Rutherford College (now Northumbria University) when war broke out. He marveled at how the life of his family and millions of others changed so rapidly in a matter of weeks during 1914. There were few signs that such a transformation was to take place. He recalled hearing the news that Britain was going to war…

“We seldom read newspapers, but could not help noticing the headlines on placards outside stationers shops. I regularly walked with three companions two miles to college, one morning reading that an Austrian Archduke had been assassinated in some strange place with an unpronounceable name in Europe, but thought little about it, till, after a few days, the placards announced that several countries were preparing to go to war.”

When the students returned to Rutherford after the summer vacation, fighting had begun, and junior members of the Territorials or Naval Volunteer Reserve had already left to join their units. Those that were too young were eager to be involved. At school, the masters tried to explain to the students why Great Britain had declared war but most were more concerned with how they could join up as soon as possible.

“With few exceptions the older boys were in a fervent mood to leave school and join the armed services. “

The realities of war were soon brought home for the students, however, when word reached the school that the former French master, Mr. Maubousin, had been killed in action on the Western Front. Peacock remained resolute about becoming a soldier and in 1916, after conscription had been introduced, he finally managed to enlist, falsifying his age at Fenham barracks and joining the Royal Northumberland Fusiliers.

He had a successful career in the military, fighting in both world wars, and surviving capture by the Japanese army in WWII. He went on to practise dentistry in several exotic countries, living the rest of his days in London. The Rutherford College war memorial still shows the names of the 152 old boys that died in the First World War.

On the other side of the city, George Harbottle was another young man who documented his experience of the outbreak of war in Newcastle. An apprentice at shipping firm Cairns & Noble on the Quayside, he had enjoyed his working lifestyle in the city. At lunchtimes during the week he frequented the Lit & Phil, reading periodicals such as the Fortnightly Review, Blackwoods and the Contemporary Review. While not working, he played cricket at South Northumberland Cricket Club. 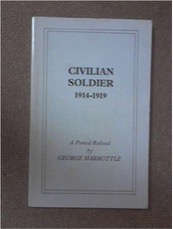 But the war changed everything for Harbottle. A war involving Germany meant his job with the trade into the Baltic Sea had disappeared virtually overnight. He along with hundreds of other commercial workers were left with the uncertainty of what to do next. He recalled how he spent the Monday bank holiday, August 3rd 1914…

“War was very much in all our minds when I went over to the South Northumberland Cricket ground in Gosforth on the Monday Bank Holiday afternoon where we were supposed to be playing a team from another club. Their team failed to turn up for some unexplained reason no doubt connected to the war, for which the Territorial Force had already received its calling up papers. Several of us sat there in the sunshine and discussed what our personal action should be if, as already seemed certain, war would be declared next day.”

The very next day he went to St. George’s Drill Hall, enlisted, and was told to report to his company which was already assembled at Tilley’s huge dance hall on New Market Street. It was unsettling for George that the memory of an everyday Newcastle place would be changed as somewhere forever associated with the war…

“Having reported to “A” Company at Tilley’s I was somewhat saddened to find we were all ensconced on the beautiful dance hall floor on whose surface I had spent many a delightful evening’s dance in very different company from the heavy army booted present denizens, with their dixies of tea or stew slopping about on that sacred floor.”

Harbottle fought in the war and survived the conflict, returning to Newcastle and writing about his experiences in several books. He became a stalwart and president of South Northumberland Cricket Club and died in 1998 aged 104.

In the few decades before 1914, life for ordinary Newcastle families had not changed a great deal. Families had stayed close knit even after members had married and left the homes of their parents. Except for sailors, soldiers, and skilled engineers, few folk had travelled extensively and even a trip to London was a much discussed event. From the week starting 3rd August 1914, the city would be fundamentally altered forever, as tens of thousands of men left home for the armed services, travelling to places and countries which had been only known to them in geography books.