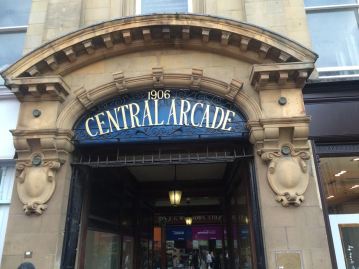 Central Arcade today would be one of the areas most easily recognisable by someone familiar with it in 1914. The internal layout was only 8 years old, with top of the range tiling and mosaic flooring. There were shops on the ground floor, with offices upstairs, as now, on the Grainger Street flank. One of them, the National Mutual Life Association of Australasia had a large sign on the upper facade. Over the other side was the Central Exchange Hotel, managed by Mrs. Hollingsworth. Its entrance was on Grey Street, used now for the apartments that have replaced part of it. 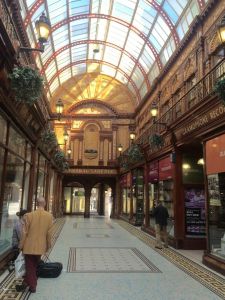 As today, the shops on the north side of the Arcade had entrances on Grainger Street also. There was a piano shop; a confectioner; an art store, a drug store; Mrs. Barnfather, staymaker; and Ellenger’s trunk manufacturers. The entrance from the street was flanked by Pringle and Wainright’s tailors and J. Hamilton, bootmaker (whose sign remains).

On the south side, Arthur Winter’s fancy goods repository was the only shop that also opened onto Market Street (units now empty since the Tourist Office closed.) Farther along was J.G. Windows, music dealer, which has expanded into the neighbouring units (then a milliner and a confectioner.) It has also gone upstairs into the former hotel. The range of shops on that side was completed by a costumer; Arthur Winter’s other shop, selling toys; and the Arcadia Tea House.

The short Grey Street side of the triangle also had small shops on the ground floor. Two of them, Browne and Browne’s booksellers and Bailey’s wines and sprits flanked the entrance and also opened into the Arcade. Towards Market Street was a tourist agents and the offices of the Great Central Railway (now Carluccio’s). Leadbitter’s tailors occupied the corner and the first units on Market Street. Up the slope, beyond the building’s goods entrance, was William Hollingsworth and Sons hairdressers, with a large sign on the facade of (presumably) his wife’s hotel. On the other side of the Arcade entrance from Arthur Winter’s street entrance were the Russian Fur stores and Harton Dye Works, now part of Barclay’s Bank, which in 1914 only occupied the rounded Grainger Street corner,

Very little changed during the war. Arthur Winter closed his toyshop, although the overall number of toyshops in the city did not decline. The Viola Parisian Diamond Company replaced it.