Over the next few months, interns and volunteers on the Reflections project will write a few blog posts to discuss their experience working on the project and some of the research materials they have uncovered. This time volunteer Tim Candlish discusses his research into Newcastle Central Station and The Mining Institute during the war.

My research for this project has been focussed on two particular areas; Newcastle Central Station and the North of England Institute of Mining and Mechanical Engineers. The former started with information regarding memorial plaques in and around the Central Station. For the latter, I began with a selection of material from the Institute’s War and Rescue project of 2014. I am indebted to Librarian Jennifer Kelly for her assistance. 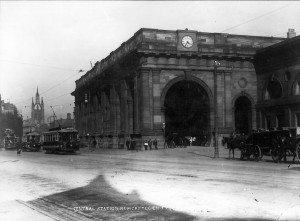 Primarily the North Eastern Railway operated Newcastle Central Station during the war. Incorporated in 1854, it combined the York, Newcastle and Berwick Railway, the York and North Midland Railway, the Leeds Northern Railway, and the Malton and Driffield Railway. Based in York, its principle stations were York and Newcastle Central stations, with works at Darlington, Gateshead, York, and elsewhere. NER employees went to war in considerable numbers, with an NER ‘pals’ battalion being raised for them in Hull in 1914. The final total of NER personnel killed in the course of the war came to two-thousand two-hundred and thirty-six. 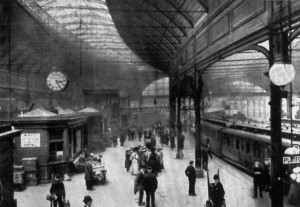 The memorial plaques included two lists of station employees who served in the war; from the Accountants Staff and the Goods Manager’s Staff. I was able to ascertain further information about these men from Darlington Borough Council’s Ken Hoole Study Centre, which includes a database of known North Eastern Railway personnel who served in the war, and an assortment of other NER documents. Of the thirty-eight men on both lists, the majority served in the enlisted ranks, though four Second Lieutenants were identified. Six are known to have died, with one listed as wounded, one as missing, and one known to have been a Prisoner of War.

The data from the North of England Institute of Mining and Mechanical Engineers focussed primarily on the stories of several members of the Institute. Most of these involved war service, but included one unfortunate example of a member who fell foul of the prevailing atmosphere. The man in question was a certain Arnold Lupton, a mining engineer expelled from the Institute in 1917 after being convicted under the Defence of the Realm Act for possessing an anti-war pamphlet. He was fined £200 with 50 guineas expenses, against which he unsuccessfully appealed. Another interesting story was that of George Jacobs, who died of his wounds on 10th October 1916 while serving with the 47th Field Ambulance, RAMC. Born in Russia to Israel and Augusta Jacobs in around 1855, he is known to have married Augusta Asher in Sunderland in 1876. Her parents, Israel and Adelaide Asher, were born in Germany but known to be living in County Durham by 1854. This union of the children of Russian and German immigrants was a reminder to me of just how intertwined the peoples of Europe had become in this period. 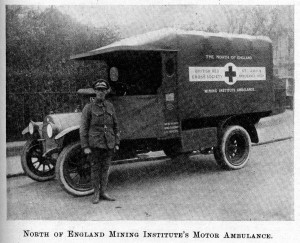 The material also contains information on a military ambulance funded by the Institute, including two photographs. The money was raised in response to a campaign by Colonel Sir Henry Dennis Readett-Bayley, whose Dennis Bayley fund raised over a million Pounds to provide motor ambulances, hospital boats, and other equipment. The Institute was only one of many such organisations within the mining and colliery community to respond. The Institute definitely bears further research, especially on the issue of links with similar organisations in Germany and elsewhere in Europe.

Like Loading...
This entry was posted in 1914, 1916, 1917, 1918, Lit and Phil, Newcastle, volunteers, World War 1 and tagged Newcastle Central Station, The Mining Institute. Bookmark the permalink.